A ceremony was held today at the Dadabhoy Institute of Higher Education to commemorate the 79th Anniversary of the Pakistan Day.Apart from remembering the salient of the 23rd March 1940 resolution, the theme of the function included a tribute to Flying Officer Marium Mukhtiar TBt, PAF and recognizing the resolve that she demonstrated through becoming amongst the first few female fighter pilot of Pakistan Air force. More particularly the determined effort that she made to save lives of students by choosing to avoid a children school which lay in the path of her ill-fated aircraft prior to its crashing in the fields of the Kundian in 2015. 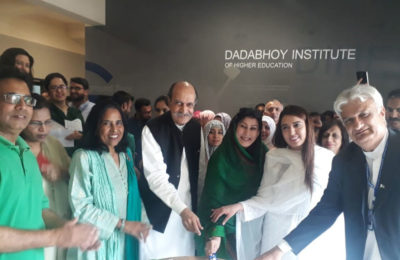 The function at DIHE was graced by Begum Rehana Mukthiar, mother of flying officer Marium Mukhtiar, who recounted aspects of the late flying officer life and the determination that she showed throughout her life to resolve to do something and achieve it; including during her short but eventful career in the Pakistan Air-Force. The students of the institute rendered national songs and presented short speeches to highlight the importance of the day and also make recommendations on the life that the youth of Pakistan should lead so that the tenets of the Pakistan Day resolution can be upheld.
All Deans of the institute, the Registrar, the Rector Prof. Dr. Mukhtar and the Chairman of DIHE participated in the event and eulogized the services and sacrifices rendered by fore fathers to get Pakistan and make it strong as it today. The chairman DIHE Mr. Abdullah Dadabhoy thanked Begum Rehana Mukhtiar for having shared some great values of life with the students and urged them to adopt positivity in life. He also announced a scholarship in the name of late shaheed flying officer Marium Mukhtiar to recognize her heroic act.
The function concluded with the traditional hoisting of the National Flag against the playing of national anthem in the entrance courtyard of the DIHE Main Campus building.